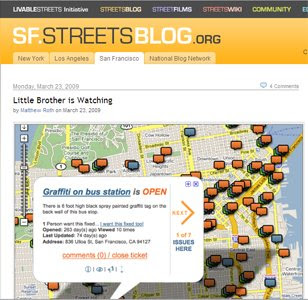 From The article:
"In San Francisco, Phil Bronstein, the Editor-at-Large of Hearst Newspapers Division, is a big fan of SeeClickFix and is planning to use the mapping widget on SFGate.com. Kevin Skaggs, Executive Producer of SFGate.com, said that they have been preparing a collaboration with SeeClickFix since Bronstein blogged about them last year and will use the widget in a few months when they roll out their hyper local Chronicle sites, much like the New York Times' local blogs.

"SeeClickFix gives the Chronicle a way to bring ChronWatch online," said Skaggs. "SeeClickFix adds another way for the community to get involved in local media outlets."