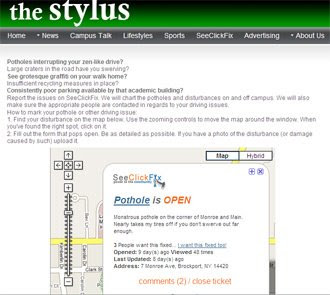 Brockport is a College Town home to SUNY Brockport and as such their local paper is their College Paper.
SeeClickFix met with Amanda Seef, Executive Editor of the Stylus, at the College Media Advisors Conference in NYC a few weeks ago and since then they have been working to include SeeClickFix in their site.
Snippet from the article,
""I think it's a great thing for residents of Brockport," Off-campus representative Eric May, said. "It's a great initiative, and I would highly encourage everyone to use it."

Other uses of the site are for parking issues, recycling problems, needed or improved pedestrian pathways and sidewalks, crumbling or deteriorating architecture, such as stairs and unsightly graffiti or housing in residential areas.

Users on the site can create "watch areas," where an e-mail will be sent to those registered when a new issue is posted. Many officials create watch areas in order to track residents' complaints.

As of Monday, there were four complaints on Brockport's page of SeeClickFix, which can be accessed through The Stylus Web site at www.thestylus.net/fix, or by going to www.SeeClickFix.com and entering Brockport, N.Y.

Of the four complaints, two are potholes, one is a bump in the road and the last is on-campus parking. One pothole, which is reportedly located on the corner of Main and Monroe, has been identified as a sunken catch basin. So far, three users have requested the disturbance to be fixed.

Harry Donahue, the director of the Department of Public Works (DPW) commented on the logged item on the Web.

"Looked at the SW corner of Monroe at Main and there is no pothole," he wrote on the site. "There is a catch basin right at the curb that has sunk down, which I will put on list of catch basins to fix.""